He made a little further show of protest, let a slow breath from his chest,
and accepted the check.
I suspect for a second, at the crest of the tension, he was tempted to shred it,
but he suppressed the intention and left with a sense of apprehensive dejection
and not a speck of resemblance to the man who'd stepped in the entrance
incensed and aggressive. And he was gone with less than a sentence,
which I suppose is as much as I could have ever expected.
I wonder what old-line company will next be dazzled
by the sales talk he so deftly handles,
only to be stuck with the failed plots, veiled frauds and hefty hassles
of a paper trail fraught with the stale posturing
of the same frail flop that left me rattled.
I wonder, who's next in line
to slay a dragon for an empty castle with no treasure chest inside?
Nothing but the regrets and the stress and the mess and the debts to find?
Any friend of mine who knows me and my enterprise can testify
that I'm usually one for hedgin' my bets but I reckon I went awry,
and the result, well, it wasn't the best surprise.
There's no sense in trying to be trite or nasty,
so I contemplate what I ought to say when the next boss across the way writes to ask me
why we were willing to let him go. I mean,
what can I in good conscience say? I mean,
what's the proper phrase? I mean,
what's the honest way for my response to place
him on the range from ‘we weren't on the same
wavelength’ to ‘watch out, he's a pompous naif.
He's non-stop with the suave talk but he can't concentrate.’

If I tell the entire truth it may end his business career.
And there is always the hope that, next time, he will act not so foolishly.
Not so stupidly. He'll adopt a suitably modest approach
and when he sees it he'll seize his opportunity for positive growth.
I know it'd be a shock to you and me,
given his lack of discipline and lack of balance, but he has the talent.
There is no doubt about that.
He is undeniably a very brilliant man.

Continue to the site →

The Ups and Downs of Almost Dying

The autobiography of Kieran Block as told to Michael Belzil 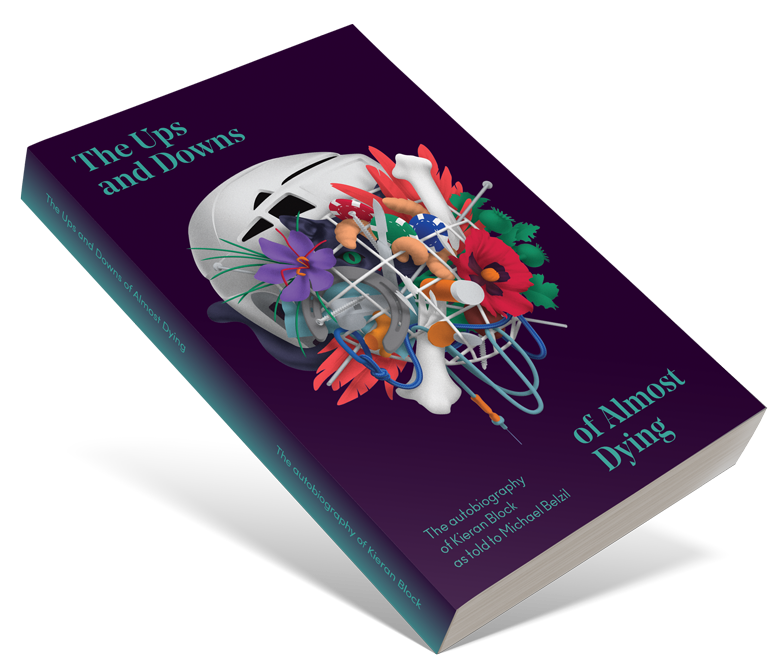